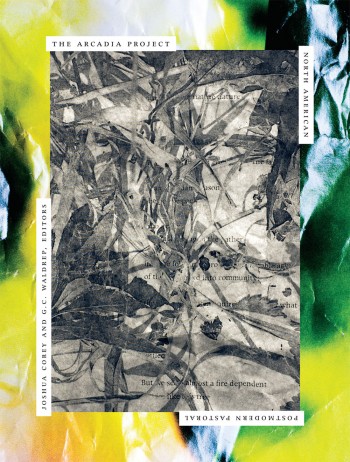 The Arcadia Project: North American Postmodern Pastoral is a nearly 600-page anthology bringing together seminal work in the genre of the pastoral as it has evolved into the 21st century. Published by Ahsahta Press, edited by poets Joshua Corey and G.C. Waldrep, and designed by Jeff Clark, the book includes sections on New Transcendentalisms, Textual Ecologies, Local Powers, and The Necropastoral.

“The editors of this book gathered nature poems from contemporary experimental poets, many of them under 40 years old, to present the natural world through the eyes of, as Corey says in his introduction, ‘a digital native with dirt between one’s toes,’ representing a movement in poetry toward what is sometimes referred to as ‘ecopoetics.’ Many of these poems speak from a natural world in flux and crisis, registering the degradation of the environment from all angles as well as human encroachment on it: ‘Starlings in the magnolia tree crackle, static, lightning: a helicopter floats overhead,’ writes Susan Briante in ‘The End of Another Creature.’ Of course, they also sing nature’s beauty, as does John Taggart, who describes the ‘white deer the animal the true animal body no jewelry.’ The editors also offer a fairly comprehensive tour of contemporary poetic forms and modes, from mostly traditional lyrics and long poems to prose poems, concrete poems, colleges, and other pieces that might best be described as visual art with words, such as Robert Fitterman’s ‘Zoomburb.’” –Publisher’s Weekly

Please visit The Arcadia Project’s website for an evolving discussion about postmodern pastoral, new media related to the book, essays, and interviews. The website also includes a teacher’s guide for those using the book in their classes.