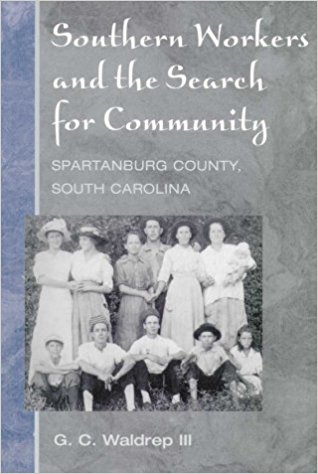 Southern Workers and the Search for Community

An impressively researched work that is very well written, it uncovers the sordid relationship between corporations and government that made union organization difficult in the South and union success almost impossible.

Southern Workers and the Search for Community is the first major effort to interpret the enduring legacy of the southern textile industry, company-owned mill villages, and the union struggles of the 1930s. Focusing on Spartanburg County, South Carolina, G. C. Waldrep offers an eloquent study of the hopes and fears that define patterns of labor activism.

Revealing a complex meshing of community ties and traditions with the goals and ideals of unionism, Waldrep shows how unions fed into a social vision of mutuality, equality, and interdependency already established in mill villages. This powerful sense of community, however, ultimately rested on sand.

Because the villages themselves were the property of management, any labor conflict involved not only issues of wages, hours, and working conditions inside the mill but also virtually every other aspect of life. Most important, the mill owners held the trump card of eviction. Waldrep looks beyond official versions of union activity in Spartanburg County to explain the episodic and apparently erratic eruptions of labor tensions and intervening periods of calm.

Drawing on private records of textile workers, their employers, and their unions during the 1930s and 1940s, as well as more than a hundred oral interviews with workers, Waldrep reinterprets the periods of “quiescence” that have long puzzled historians. Documenting the high stakes of labor protest in mill villages, Waldrep shows how the erosion or outright destruction of community systematically undermined the ability of workers to respond to the assaults of employers overwhelmingly supported by government agencies and agents.

Beautifully written and persuasively argued, Southern Workers and the Search for Community opens the gates of southern company towns to illuminate the human issues behind the mechanics of labor.

“A welcome contribution to the literature on southern working-class culture. Concentrating on the informal structures of textile workers’ lives in Spartanburg County, South Carolina, in the 1930s, G. C. Waldrep III seeks a language for the ‘private transcipt’ of their history. He employs such official documentation as newspapers, government records, and union archives but relies most heavily on workers’ oral histories.”
–John Hennen, American Historical Review

“One of the book’s strengths is its use of oral history…Another is [Waldrep’s] use of the workers’ letters to President Franklin D. Roosevelt. In this, he brings the anguish of a number of heretofore invisible individuals to light.”
— R. Phillip Stone, Journal of Southern History