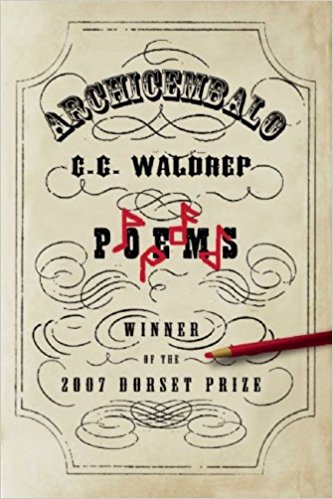 G.C. Waldrep’s Archicembalo is an acerbic, whimsical, and deeply intelligent fusion of poetry and music. The book is structured like the “gamut” or self-instruction primer that prefaced volumes of 19th-century American sheet music. Straddling a pliable line between prose and poems, this linked sequence draws on Waldrep’s undergraduate training as a singer (tenor/countertenor) and conductor of early repertoire. Waldrep has said, “I was interested in writing about music in language, but on music’s terms, in music’s vocabulary of phrase and affect, its logic of composition and performance. The poems are a kind of mental music: They are meant to take shape in the reader’s mind, as music.”

“Often breathtaking in its erudition, at other times imbued with a forceful simplicity, tricky in its sensibility yet clearly driven by affection, this third collection from the prolific Waldrep might be the best book of prose poems to appear in a long while.”
—Publishers Weekly, starred review

“Few poetry collections published this century as capably cleanse their readership with unerringly collapsing waves of sound and meaning—just the sort of phenomenon that commands the constant attention, engagement, and admiration of readers….[Archicembalo] is among the best contemporary poetry we have, and it compels this reviewer, as precious little other poetry does, to remark, with evident pleasure, ‘Now that’s poetry.’”
—The Huffington Post

“[Waldrep’s] great triumphs combine such outward sympathies with self-conscious attention to inward oddities, to fleeting thoughts, to the vectors of energy in abstract words.”
–Stephen Burt in The New York Times